Earlier this month Harriette Calvert from Clipso Watford worked at the Fashion in Motion event which was held at the V&A museum with L’Oréal Professionnel. On the day she worked on four shows for designer, Fyodor Golan. Jonny Engstrom at Guy Kremer directed Harriette and the rest of the session team to create the hair looks.

The hair was styled in a smooth high ponytail which was looped in and gathered at the nap to form a second ponytail.  This worked well with the architectural shapes of the hats and clothes, and contrasted with richly embellished fabrics.

The V&A’s Fashion in Motion series brings catwalk shows by some of the greatest designers of our time to the V&A and makes catwalk couture accessible to a wider audience, modelling it against the beautiful backdrop of the Museum.  Previous designers in the series have included Christian Lacroix, Hardy Amies, Jean Paul Gaultier, Missoni, Anne Valerie Hash, Swarovski, Vivienne Westwood, Eley Kishimoto, Gareth Pugh and Erdem. 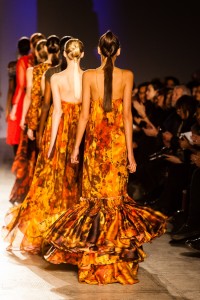 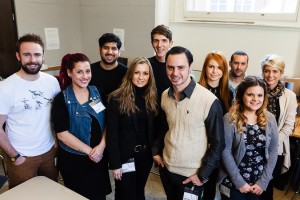