Darren Fowler, International Creative Director for the Clipso Salon Group together with members of the session team created strong couture, twisted and slightly dishevelled ponytails for the Bernard Chandran AW13 Show held inside the Freemason’s Halls on Saturday 16th February. Then on Tuesday 19th February they created a series of looks ranging from sleek and groomed styles to 40’s exaggerated glamour for the Ziad Ghanem AW13 Show also held inside the Freemason’s Halls.

“The collection was strong, very fashion forward but with a young fresh feeling. The models displayed classic 50’s glamour and pure elegance. The designer, Bernard Chandran also combined the 50’s with a more modern day feel, by incorporating patent corsets, fur trimmings and sheer panels to his collection,” explained Darren.

The hair had a pure fashion element to it; there were clean lines through the front with double texture but still maintained a sleek appearance. Hair was worn in a middle parting and pulled back into a ponytail sitting below the crown. The back section was complicated and worn in a two piece twisted ponytail. The hair team twisted sections of hair individually then incorporated them into the twisted ponytail, which was pulled tightly. They added dry texture into the twists for a young and fresh look.

“The show went exceptionally well and I always love working with Bernard. The hair team and I worked right up until the very last minute putting finishing touches to the styles. Some of the models wore hats with a hooded feel so we had to get these on and off very quickly which was a challenge for us, but it all went smoothly,” explained Darren Fowler. 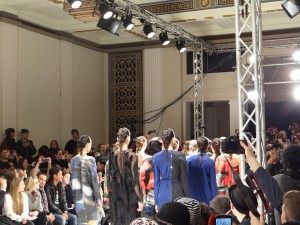 “The collection was made up from various characters. The models were very unique in this show, some were professionals and others weren’t but either way they looked fabulous. Ziad went for luxurious dresses made out of gorgeous textiles with crazy in-your-face prints,” explained Darren.

The hair for the majority of the models was very simplistic and clean with continuality throughout. Hair was swept into sleek ponytails and then wrapped around the ponytail to give a sharp 3D feeling and looked different when viewed from several angles. Few of the models hair reflected 40’s Hollywood glamour, whilst other models had blue and yellow paint applied to their hair, which added drama.

“This show was extremely fun to work on and was so creative for us. It really pushed our boundaries as each of the models were seen as a character so we had numerous looks to create.” concluded Darren Fowler. 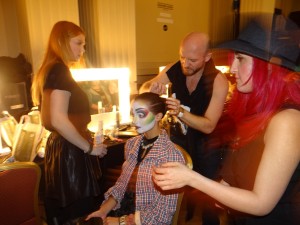